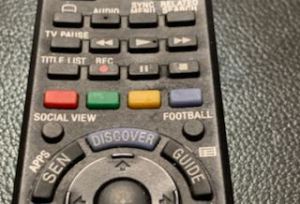 It all started before 2010. We bought our first PVR (Personal Video Recorder). It was a Topfield.

My wife was a little stunned, a little angry and wondered what on earth I had done. I had tried explain to her what a PVR was and the benefits of owning one would bring.

By recording a show on free-to-air TV we could skip through the ads! We used it so often that, literally, 12 months later, we’d accidentally watch an ad and say, “so that’s what that’s about!” It also rescued watching time considerably! Do you realise how many ads there are sometimes duding commercial television? We’d count them sometimes, nine was our record. Nine times 30 seconds (4.5 minutes), 3 or 4 times during a show!

The yellow button saved us time and some frustration.

Since then we’ve referred to anything we do that brings a benefit as our “yellow button”.

We can make our lives a little easier even though there might be an upfront cost – changing routines, eating differently, getting more exercise, meditating, reading positive books, getting off Facebook!

As you make one change, other changes can become easier, the cost to change reduces.

What has been your “yellow button”?

What change did you invest in that made a significant, positive impact?